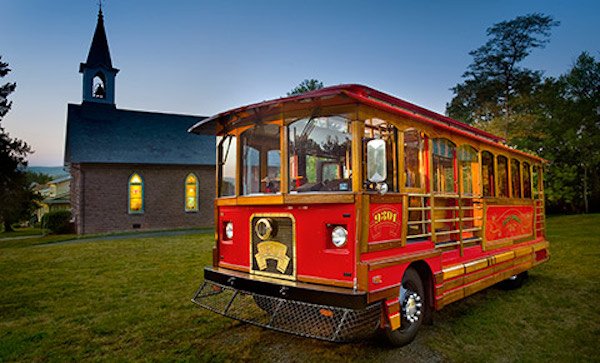 Borough council voted to buy a trolley Monday night. The trolley will be provided by Elite Coach of Ephrata for $39,900. (Voting was unanimous among the five councillors present. Sherry Welsh was absent, and Stephanie Weisser has rendered her resignation, effective December 1.)

The trolley is a 1993 model with 53,000 miles and was used previously by the borough during the Columbia lantern tour.  Public Works Director Ron Miller took a test drive/ride for several miles recently and described the vehicle's engine and transmission as "excellent" and presented council with an extensive written report. He called the venture "not a frivolous investment whatsoever." The trolley is air-conditioned and comes with a lifetime supply of vehicle filters. Councillor John Novak said the same trolley in today's dollars would cost $200-250,000 new.

Council had originally planned to employ the services of Rivertowne Trolley Company again in 2017 until a sudden opportunity surfaced to buy its own trolley. The issue normally would have gone through committee before being presented to council, but councillors felt the matter warranted quick action due to other parties interested in acquiring the vehicle. Columbia paid $30,600 last year to rent Rivertowne's trolley.

Councillor Cleon Berntheizel said, "I look at this as an investment in the borough."
Posted by Joe Lintner at 9:43 PM

It's a shame to just keep buying and buying on tax dollars! You people need to get a real hold on reality!

They should put a snow plow on it. Then we can say it is useful. Does this need to be to be bidded out like the old fire chief's s10 blazer?

Since it is for hire, I believe they need a PUC license.

Will the borough have to hire a driver to operate it? It sounds good in some ways but I think they jumped the "gun" to quick. Understand, others were interested in it.

Columbia bought a 1993 used bus, not trolley. A trolley runs on tracks. I saw the revenue from the bus runs last summer which was not much. I would love for someone to explain to me how this is an investment. Don't forget the insurance, maintenance, fuel, and operator costs.

Question, since this was not on the preliminary agenda at what point was it put on? Was there public discussion on this? Do we have a total yet on what the Coffee Club has spent on "dreams?"

Elite Coach had that for sale, because I saw it online. They needed to find a quick buyer and Columbia fit the bill.

I thought they used the Red Rose bus for the SVCC event. This Trolley is from Reading, not Lancaster.

The lies and deception this Council displays is irresponsible. There has to be right to laws broken in these past circumstances.
They must go, and Greg Sahd needs stop helping Cle and Kelly and help us the taxpayers. Push the working class out and bring in the landlord's.

Councillor Cleon Berntheizel said: "I look at this as an investment in the borough."

How out of touch can someone be? Hard to believe someone would think a 25 year old bus as an investment. Unreal.

Not his money! Norm Meiskey would have never left this happen. He was fiscally responsible, not Greg Sahd opening OUR checkbook when Cle and Kelly come holding hands and skipping into his office with a lain brain idea.

Hello! I'm just wondering what kind of kangaroo council we have here. They rushed through the vote on the trolley without even putting it on the agenda. Did council people shop around for a trolley? Did they put it out for bid or request proposals? They have been ramming things through without going through committees and without proper debate for the wants and desires of one or two people. If this does not stop I can only hope they get caught in their own web.

So under Kelly and Cle's watch this year, four "veteran" members of council have resigned. Why am I not buying the excuses given -- illness, work, etc. Was it because they knew they were in the minority on many of these issues and new they didn't have the votes to fight the president and vice president of the Coffee Club? Perhaps a call to the state to file an ethics complaint is in order.

Yes Norm Meiskey would not have allowed the spending free fall, but then again the Coffee Club would have fired him for that. Perhaps Mr. Sahd wants to keep his job and has no choice but to allow this.

Yes it is sad that council people are resigning. It is time that people stand up and vote against them. They are only 2 votes. I can not understand how they voted unanimously in favor of the trolley when it was brought up for the first time on Monday. Next item the town will buy is the Brooklyn Bridge.The coffee club is in talks with NYC.

Excerpt from Act 90 of 2011 regarding municipal bidding requirements.

-Effective January 1, 2016, the thresholds for public bidding by Pennsylvania state authorities and municipalities will remain unchanged from 2015 and are as follows:

Purchases and contracts below $10,500 require no formal bidding or written/telephonic quotations

-Purchases and contracts between $10,500 and $19,400 require three written/telephonic quotations

Is their formal bidding paperwork? If not, this purchase was in violation!

I hope that $40,000 bus blows a motor..just to prove apoint.. this town is going down the tubes and the idiots on council are pushing it there.. i been in this town my whole life and never seen it this bad!! Pathetic from the mayor .. to the horrible police and there wasteful spending..here is an idea lets knock columbia down let the borough employees pave it.. then sell columbia to hempfield as a parking lot!!

They sure do need a PUC license! A darn shame they decided to "use" Rivertowne Trolley to their advantage in many ways, very disappointing way to do business.

maybe a walking bridge over the Susquehanna

O.K., NOW I MUST STEP IN! JUST BECAUSE THERE ARE LOTS OF IDIOTS RUNNING THIS TOWN, ON THE COUNCIL, DON'T TRY TO THROUGH THE POLICE OFFICERS INTO THE FIRE!! THE PERSONS SAYING THESE THINGS ABOUT THE POLICE, ARE PROBABLY THE SAME PERSONS THAT OUR POLICE OFFICERS HAVE TO DEAL WITH, ALL THE TIME, IN THE NEGATIVE WAY!! YOU SHOULD BE BRAVE AND SMART ENOUGH TO BE AN OFFICER OF THE LAW, WHO ARE CERTAINLY VERY SERVING AND PROTECTING YOUR BUTT! TODAY BEING AN OFFICER OF THE LAW IS ONE, IF NOT THE MOST, DANGEROUS AND MOST UNAPPRECIATED JOB IN THE COUNTRY! THEY RECEIVE NO RESPECT, BUT ARE EXPECTED TO DO EVERYTHING FROM BABYSITTING YOUR KIDS TO TAKING YOUR INSULTS OR WORSE! COME ON MR.OR MS. R. CITIZEN, LETS GIVE CREDIT WHERE CREDIT IS DUE! AS FAR AS SPENDING YOUR TAX MONEY, COMPLAIN ABOUT THE ONES DOING THIS, LIKE THE COUNCIL AND ALL THE 'INDIAN CHIEFS' IN THE MUNICIPAL OFFICE, NOT THE POLICE DEPT.!

Interesting information....if in fact the borough council made this purchase without following the bidding guidelines as regulated in the PA Borough Code, Section 1402, Title 8 of the PA Consolidated Statutes, those members voting for the purchase may have committed a misdemeanor of the third degree as stated in section 1403, "evasion of advertising requirements" of the same statute. Without knowing all the facts, I can not say for sure of a violation of the law occurred. For example, if the trolley was purchased via a state contract, no bidding would be required. Regardless, perhaps the District Attorney should be looking into this matter, if for no other reason, to make sure everything is on the up and up.

The current council is going down a slippery slope with their spending practices. The "wishes" of a few (aka the Coffee Club) is not the wants of many. But if you go to a meeting, they definitely do not want to hear ideas of people if it is not in agreement with the process.

Our police department is undermanned and our streets need a fixing. can't wait till the Coffee Club Trolley goes up Walnut Street and has an axle break. Oh wait, oh never mind.

Question of Ethics. Read where Coffee Cle's CDDC is getting money from the borough for a bags and flags program downtown? Did Coffee Cle abstain from any vote on this or the budget as a whole because of this. Serious conflict of interest and morals.

How long does this order take to process? Columbia's order has to be small. Let the businesses purchase their own matching bags don't continue making taxpayers fund business ventures. Same with trolley, "hop on-hop off" so visitors patronize businesses. Why don't the businesses pay for the trolley? It is not taxpayers responsibility.