Four diggers excavated the remains of a privy on Walnut Street this afternoon. What's a privy, you ask? The dictionary defines it as: "A toilet located in a small shed outside a house or other building; an outhouse." So, why would anyone be digging up such a thing?

In the days before indoor toilets, people used the privy not only to "do their business," but also as a trash receptacle.  In other words, a privy is - or can be - a trove of artifacts from a particular era.

Rick Weiner, one of today's privy diggers, told the Spy that workers were retrieving objects from about the 1890s. (A previous dig in the same area yielded objects from the 1700s.) He said the privy (shown below) was especially large, measuring six feet in diameter. He estimated it could turn out to be 15 feet deep. Most privies around town measure about four feet in diameter and four feet deep, Weiner said.

Weiner added that the top layer of digging usually consists of lime that was applied to neutralize the soil and moderate the smell of the privy. The process of excavation is laborious and time-consuming, as workers in the hole dig and load buckets that are continually hauled to the top and dumped. 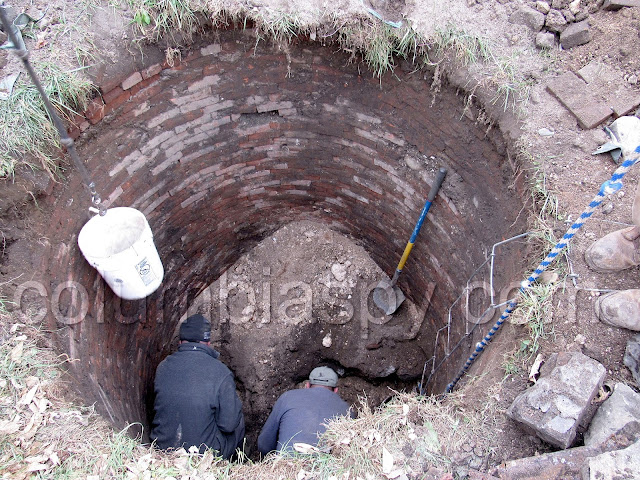 Workers dig and load soil into the bucket shown (left). The bucket is then pulled up and dumped. 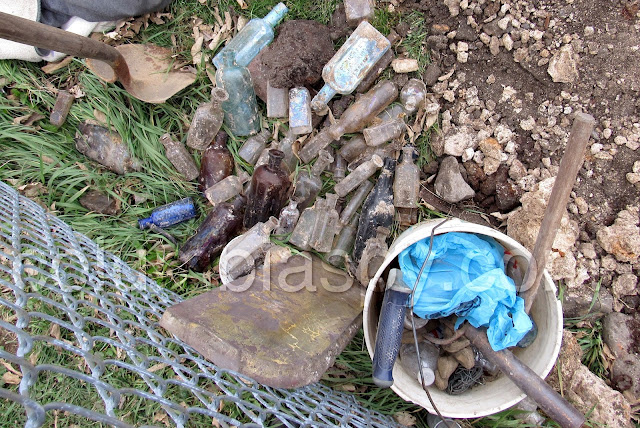 A few finds from today's dig 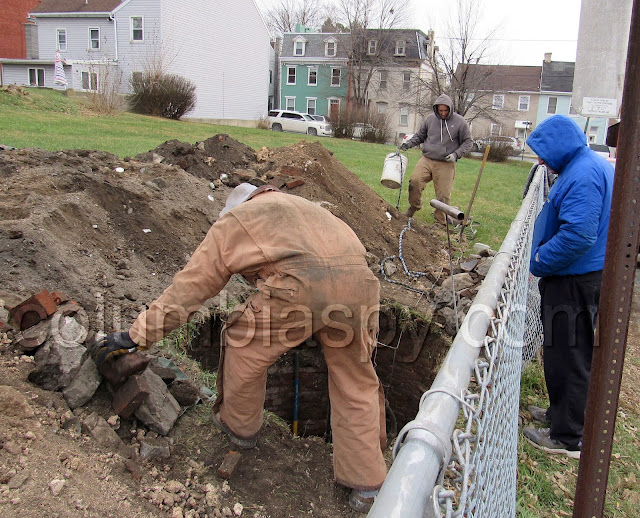 Loose bricks are set aside. The privy wall consists of a single layer of bricks stacked without mortar. 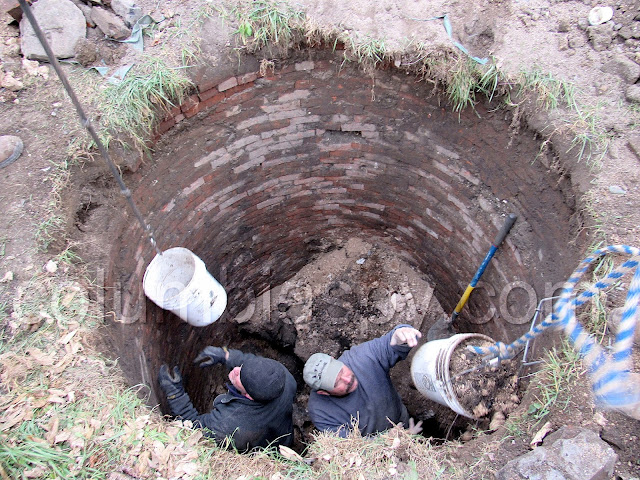 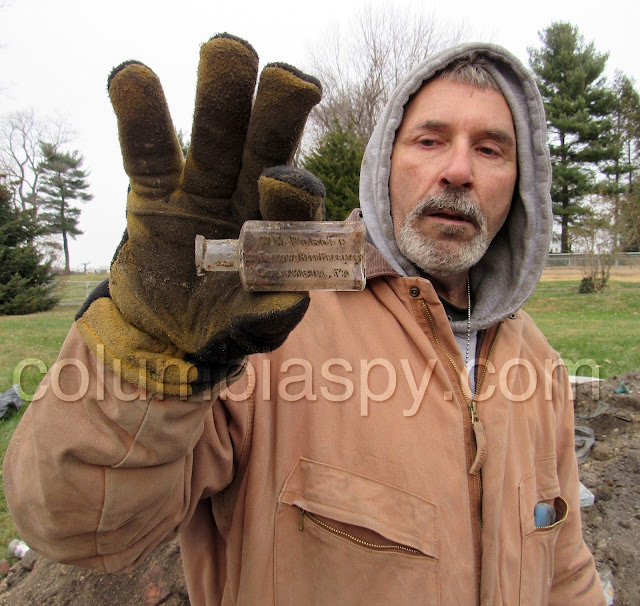 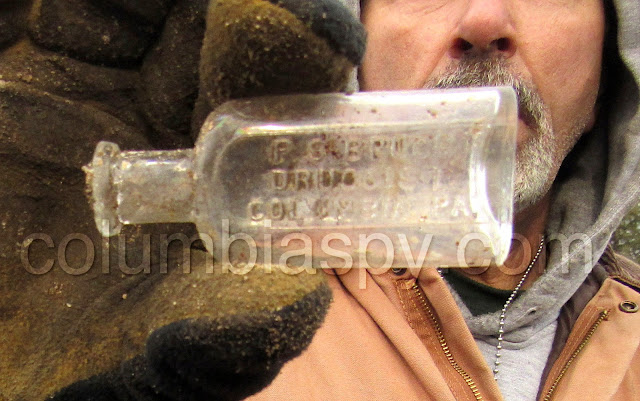 Another medicine bottle from the dig. 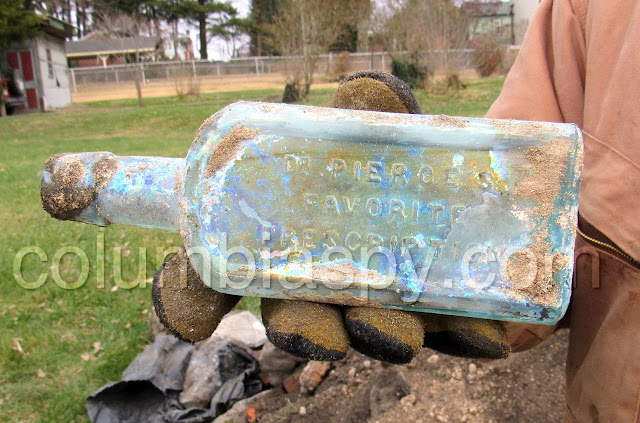 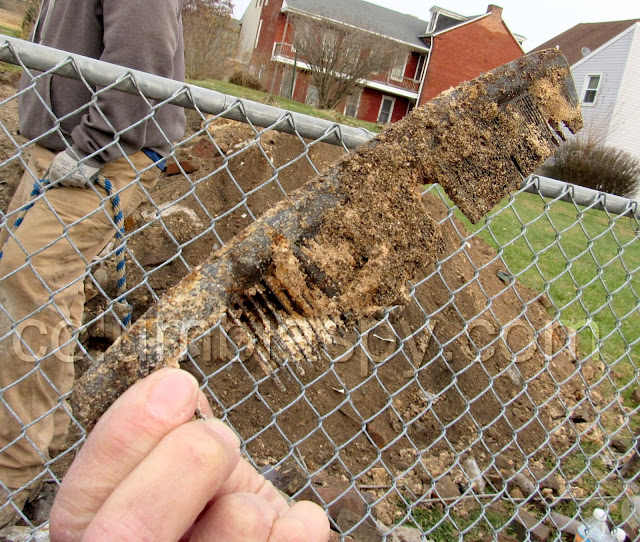 The remains of a comb
Posted by Joe Lintner at 5:07 PM

That's actually a cesspool, probably not used since the sewer mains were laid in 1933. Our house was still connected to one - for better or for worse; mostly worse - when we first bought it in 1990. I have pictures of it - looked identical to this one, brick-lined and all.

That should be considered a confined space and the workers should be equipped with a fresh air blower and harness in case they need to be pulled-out!

Might be is they were not self employed. OSHA regulations do not apply to the self employed or most private concerns. Basically, If i want to dig a hole in my back yard and climb in it, i can. Would not be smart but I can still do it.

They are very experienced dug hundreds of privies. No need for fresh air.. Its dirt...

A lot of professionals out there. The lines to the "cesspool" must have mysteriously evaporated.

These artifacts must be worth thousands of dollars. These treasure hunters are rich now.

Do people get payed to work? Yes!
Is it wrong to save history? No!
Is it wrong to share history instead of it being bulldozed or built over and hid forever like in Egypt? Even today we cannot replicate what they have built because the history was hid!

It should be preserved , fenced in, and turned in to a beautiful outdoor wishing well , as an educational item of interest and part of the downtown walking tour . Nice that it was left open at east a bit for photo ops

Rumor has it the workers ran out of daylight before they hit bottom ( where the best stuff is ) and the George Weiss told the owner the next day to stop work until he gets a permit . Naturally, the workers will tell you they hit bottom and there is nothing left :-) Rumor also has it that a buyer just coincidentally locked up the property and nothing can happen now until after settlement. Someone knows there is more down there. The best stuff is always at the bottom. Items worth tens of thousands or more have come out of these things and that is a big one !!