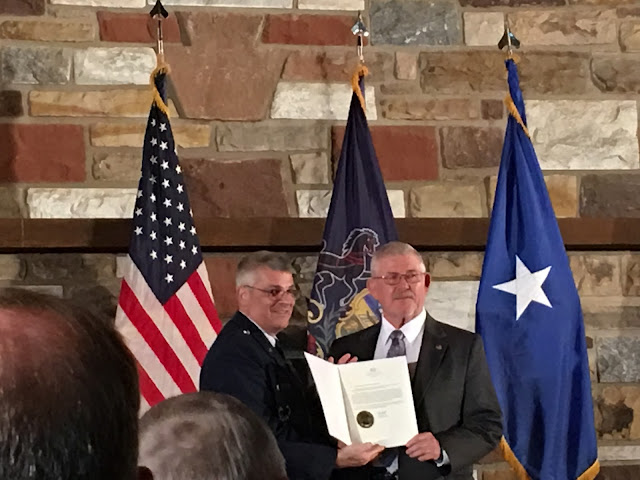 Annville, PA – The Pennsylvania Department of Military and Veterans Affairs today inducted two new members into its Hall of Fame, recognizing their exceptional service to the department, the Pennsylvania National Guard and Pennsylvania veterans.

Honored today were the late Maj. Gen. Edward C. Shannon, who served in the Pennsylvania National Guard and as Lieutenant Governor of Pennsylvania from 1930 to 1935; and The Honorable Jessica L. Garfola Wright, who retired as an Under Secretary with the Department of Defense and served as Pennsylvanias 50th adjutant general.

"Whether you call them Pennsylvania patriots, citizen soldiers or public servants, they both have one thing in common. They have distinguished themselves through outstanding service to the Commonwealth of Pennsylvania, the Pennsylvania National Guard and the United States with military and public service careers that have spanned decades, said Brig. Gen. Tony Carrelli, Pennsylvania adjutant general. So today, we honor their legacy of service as they take their rightful place in the DMVA Hall of Fame.

Shannon, of Columbia, Lancaster County, was born in 1870. He began his military career in 1889, when he enlisted in the Pennsylvania National Guard. He advanced through the noncommissioned officer ranks and obtained a commission as a Second Lieutenant in 1893. During World War I, he earned the nickname "Two Yard" because of the reputation he developed for leading his men from the front ("two yards" ahead) during their attacks on German positions. After WW I, Shannon was promoted to Brigadier General. From 1930 to 1935, he served as Lieutenant Governor and from 1933 to 1939, he served as Major General and commander of the 28th Infantry Division. Shannon died in Columbia, Pennsylvania, on May 20, 1946, and is buried at Laurel Hill Memorial Gardens in Lancaster County.

The Borough of Columbia has been the home to many brave men and women who have served their country, some who have paid the supreme sacrifice and some who have distinguished themselves in service to their country, said Leo Lutz, Columbia Borough mayor. The citizens of the Borough of Columbia are honored to have Major General Edward Caswell Shannon as one of its distinguished generals and greatly appreciate the honor you have bestowed on him today."

Wright, of Shermans Dale, Perry County, served as the Under Secretary of Defense for Personnel and Readiness with the Department of Defense (DoD) from Jan. 2013 until her retirement in April 2015. In this position, Wright was the senior policy advisor to the Secretary of Defense on recruitment, career development, pay and benefits for 1.4 million active duty military personnel, 1.1 million Guard and Reserve personnel, 748,000 DoD civilians, and was responsible for overseeing the overall state of military readiness. Her distinguished 35-year career of military service culminated with her final assignment as The Adjutant General of the Commonwealth of Pennsylvania where she retired as a Major General in 2010. In this Cabinet-level position, she was responsible for command, control and supervision of all Air and Army National Guard units allocated to Pennsylvania, six state-owned veterans' homes, and programs for Pennsylvania's one million veterans.

"No leader at the Department of Defense was more respected than Jessica Wright, said former Secretary of Defense Chuck Hagel. She effectively led one of the most complicated and vital departments in the DoD with commitment and precision."‎  The DMVA Hall of Fame, established in 1998, recognizes unique and exemplary contributions to the department and the Pennsylvania National Guard. This award not only recognizes significant achievements, but also the honor and prestige an individual has brought upon the department, the Pennsylvania National Guard and Pennsylvania veterans. It is the highest honor bestowed upon an individual by the department.
Posted by Joe Lintner at 3:09 PM