Unanswered questions have been swirling around town since the June 16 Columbia Borough School Board meeting. Changes, resignations, and appointments are making the actions of the board look like a veritable chess game.

Board President Tom Strickler resigned after announcing his intention to apply for an administrative position with ELANCO.
Strickler's resignation is effective July 18 at 11:59 p.m.

In a unanimous vote, the board appointed board member Cole Knighton as president, despite his less than desirable attendance record over the past four years, specifically:

In 2014: Eleven regular board meetings with recorded attendance: He attended four. (36%)

In 2015, board members Alysa Poindexter and Cole Knighton both missed the first three consecutive meetings of the year. By the March 2015 meeting, both Knighton and Poindexter had reached a point in which their attendance was an issue, according to bylaws. They both remained on the board, but Poindexter eventually resigned in June, having missed a total of six consecutive meetings. Knighton kept his seat.

According to Section 319 of 1949 Act 14, adopted by the Pennsylvania General Assembly:


No other candidates - including Board Vice President Kathleen Hohenadel - were considered for the position vacated by Strickler. (According to our records, Hohenadel has had 100% attendance at meetings.)

A vacant position will be created when Strickler's resignation becomes effective and Knighton steps in as president. The position was advertised in the June 29 edition of the Merchandiser: 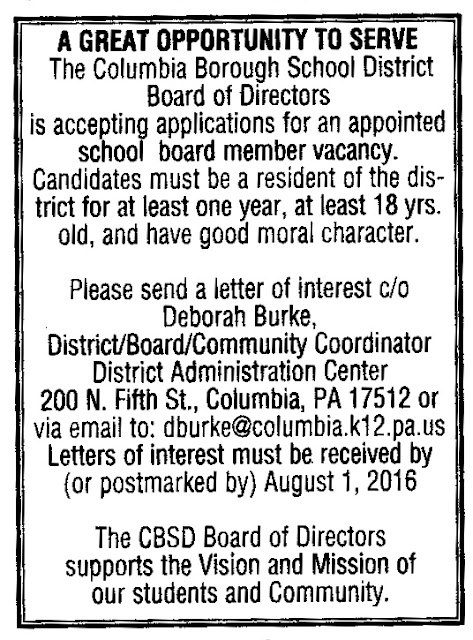 The deadline to apply for the position is August 1, 2016.

On a related note, board member Fran Resch resigned effective May 31, and the board appointed Keith Combs to fill the vacancy.


Strickler recused himself from part of the regular board meeting of May 12 due to his intention to apply for a Director of District Operations position, the posting for which is shown here: 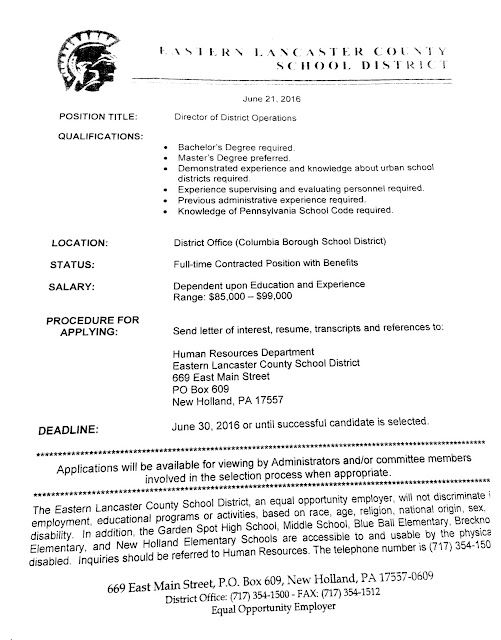 The director will oversee operations at Columbia School District but will be an employee of ELANCO and will report to the ELANCO superintendent. Columbia taxpayers will foot the bill for the director and a four-day-a-month interim superintendent to the tune of $165,000 annually . . . $85,000 to $99,000 of which will be paid to the director. Reportedly, the superintendent will not receive additional compensation except for travel expenses, etc.

Part of Strickler's resume publicly available on the internet, shows the following: 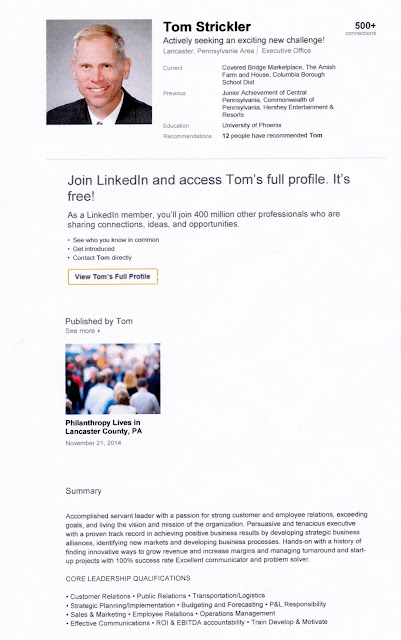 His resume also lists 18 positions and titles he has held over the past 37 years, as well as a BS in Business Administration from Elizabethtown College and an MBA from the University of Phoenix.