During a midday break from the Cruisin' car show uptown on Saturday, I stopped to take these pics of the Conrail Susquehanna Limited passenger train passing through Columbia on its rail excursion. 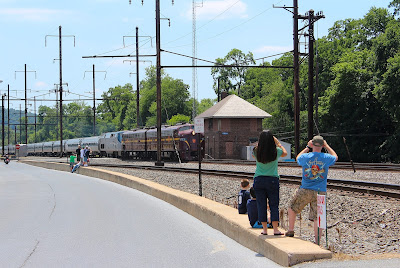 Several photographers snapped pics of the train as
it approached.  I estimate it was traveling at 40-45 mph. 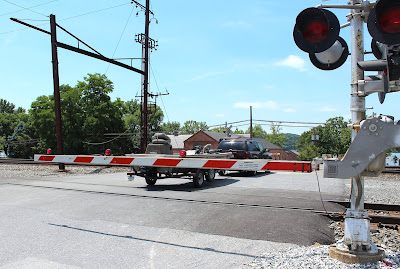 Unfortunately, a vehicle with a boat trailer had passed
under the gate just as it was descending.  Instead of proceeding immediately to safety around the gate on the other side of the tracks, the driver chose to stay on the tracks, despite the alarmed shouts of several people present.
As can be seen from this photograph, there was ample space for the driver to go around the opposite gate.
What can't be seen from the photograph is that there had been ample time for the vehicle and boat to pass over the tracks. 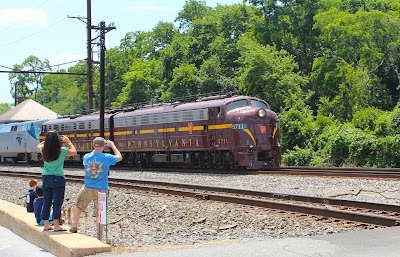 The train reached the intersection . . . 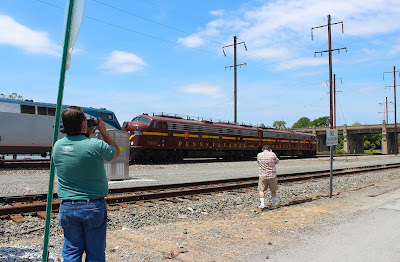 and sped past without incident . . . 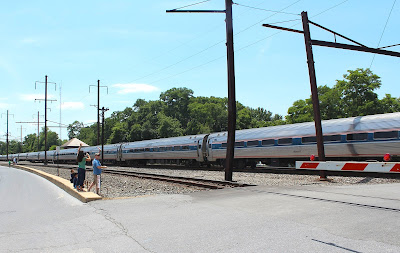 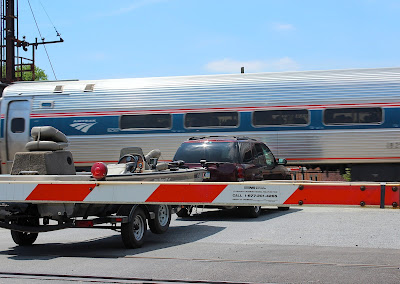 Meanwhile, the vehicle sat on the tracks, dangerously
close to the passing train cars. 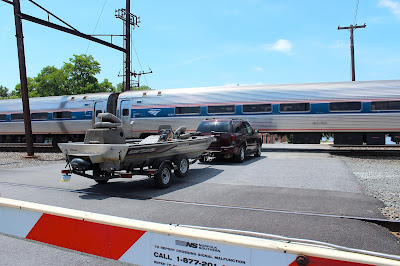 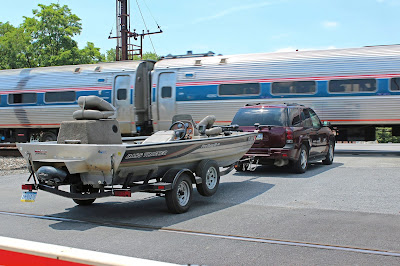 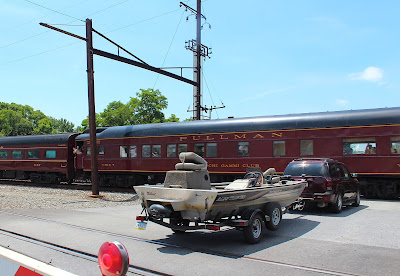 Finally, the train passed, and the vehicle rolled over the
tracks to the River Park.

QUOTE 'unfortunately, a vehicle had passed under the gates as they were descending.....'
So what happened with the warning red lights AND the bells that were flashing / sounding BEFORE the barriers descended?? Are we to assume the MPV driver was deaf as well as dumb?? Hope he/she didn't have family in the vehicle as well....suicide is one thing, killing your family is another!!

That's my family taking pictures you see there (I'm wearing the Guy Harvey shirt). We barely noticed the truck/boat there at the time as we were focused on the train. My 9-year-old took a video where the proximity of the truck to the passing train is apparent. It never ceases to amaze me how people don't take grade crossing safety seriously.

I see you got my backside in your pictures, ha ha! I'm the girl with the long hair and green shirt. That's my family watching the E8. It had to be scary...serves him right, huh?

This picture should be given to the police. Ignorant stupid people almost causing a major accident because of stupidity. Being a long time fire fighter shit like this really pisses me off.

Thanks for the link to your video. It verifies what I was saying about the close call.

Thanks for commenting. Glad I could get you in the pic. I don't know what that guy was thinking - or if he was thinking.

Yes, he really didn't think about what he was doing and the tragedy he almost created.

Yes, he had plenty of warning as he started crossing the tracks, but he decided to go anyway. I don't know why he decided to stop.